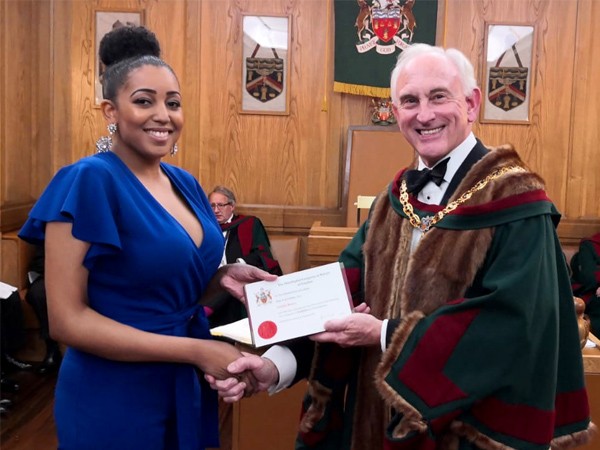 Our newest recruit to the Kudos bakery team has truly received one of the highest accolades in the bakery industry. Graduating as the top student from University College Birmingham (UCB), Natalie Brown has been awarded the Freedom of the Worshipful Company of Bakers.

Speaking about the award, Natalie said:
“I have now made history, in being the first person from UCB to ever receive this award, as usually, they award students from the National Bakery School in London but they accepted me based on receiving top grades and also for getting a fantastic job at well-known bakery supplier Kudos Blends”

The Worshipful Company of Bakers can trace its City of London origins back to 1155 and is the City of London’s second oldest recorded guild. For over 500 of those years, the Company has owned and occupied its Harp Lane site in Tower Ward, just west of The Tower of London.

The Company plays an active role in the continuing development of the baking industry and allied trades nationally and internationally through training, scholarships and as an authoritative and independent voice in food manufacture and retailing. The Company maintains a significant programme of charitable support.

To receive her award in London, Natalie had to go into the courtroom and be presented to the liveryman by the Clerk and the Master Baker, Paul Morrow. She was gifted a book and a certificate to say she has been accepted as a Freeman in the baking industry.

There were traditional moments to the evening such as singing the national anthem, a hymn, drinking wine from a trophy cup and passing it onto the next person whilst protecting their back. Port wine was passed around the table but was not allowed to touch the table as it was passed along. There was clapping in a particular rhythm to welcome the master baker, the clerk and some of the liverymen into the chamberlain hall.

What a wonderful part of English Heritage. We welcome Natalie to the Kudos team and will support her playing a part in maintaining the principles of the Worshipful Company of Bakers. Well done Natalie for this tremendous achievement.