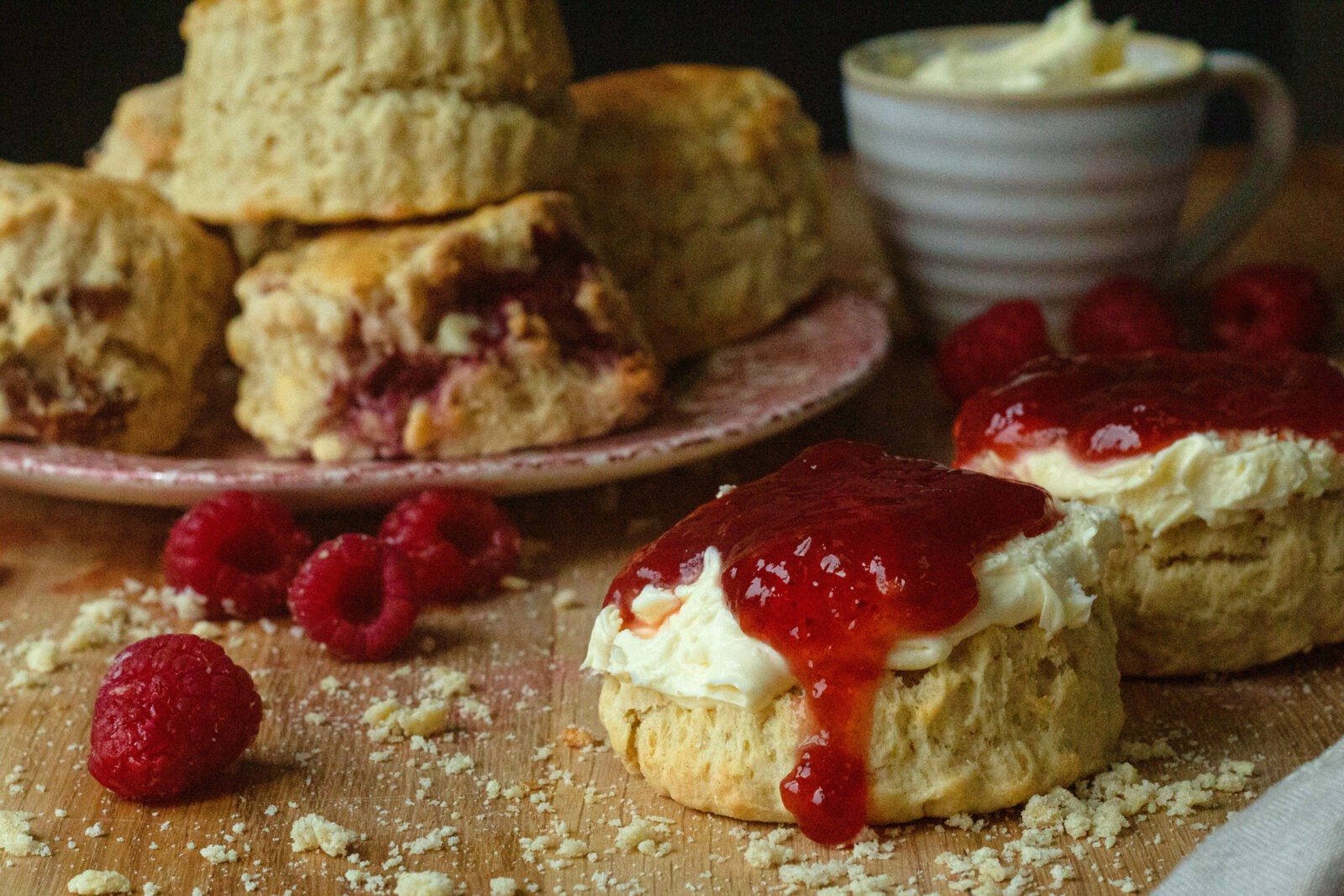 Richard Farrington is a Product Specialist at Kudos Blends. He studied food history as part of his master’s degree and also ran an award-winning café in Devon, during which time he was crowned the winner of ‘Britain’s Best Cream Tea’ (Daily Telegraph), the ‘Afternoon Tea Experience Challenge’ (Café Life Awards) and ‘Cream Tea of the Year’ (Cream Tea Review). Here he answers some of your burning questions about the famous cream tea.

What actually is a cream tea?

A cream tea is a sweet treat famous in Devon and Cornwall that pairs a pot of tea with scones, jam and clotted cream.

Scones are individual bready cakes with a natural split through the centre allowing them to be pulled apart and adorned with delicious toppings. They originated in Scotland at some point in the 1500s as a type of quick, unleavened bread (more of a flatbread) made from oats and cooked on a griddle. When wheat became widely available, and with the advent of specialist baking powders such as PELL™ Opti-scone and PELL™ K-Rise, scones have become the light, fluffy items we know today. Contact the technical team at Kudos Blends for advice on the best baking powder for your manufacturing site.

Clotted cream is a type of extra-thick, rich and unctuous cream with a buttery crust. It has been around in some form or another for millennia, being a good method of making fresh cream last longer before the days of reliable refrigeration. It was traditionally made by slowly heating and then cooling fresh milk in a shallow pan, often overnight over a low fire or in a recently-turned-off oven. During this process, the cream would rise to the surface in “clots” which can then be skimmed off and stored in jars or tubs.

What’s the history of the cream tea?

The earliest record of a ‘cream tea’ (in the sense of a type of bread product topped with clotted cream and jam) dates from the early 11th century, found in ancient manuscripts within the Benedictine Abbey of Tavistock, an ancient stannary and market town in West Devon. After Tavistock Abbey was damaged by plundering Vikings, the local workers rebuilding the Abbey needed to be fuelled with something that was readily available, cheap, energy-rich and rewarding. To this end, the resident monks topped their homemade bread with clotted cream and their stocks of sweet preserves made from the Abbey’s annual fruit harvest.

Is it jam first or cream first?

In Devon, the clotted cream goes on the scone first and then jam on top, whereas in Cornwall it is jam first and then cream. This seemingly minor difference between a Cornish and Devonshire cream tea has been the source of much consternation and debate for decades. However, a look back in history can help us solve the dilemma once and for all. In short, it’s all about the cream.

Cornish clotted cream is actually quite different to Devonshire clotted cream. The Cornish variety has a PDO (Protected Designation of Origin), meaning that its manufacturing process must follow certain rules to be able to be called ‘Cornish clotted cream’. One such rule is the requirement to source milk from local cows, which typically include Jersey, Guernsey and Friesian breeds. In Devon, however, it has always been traditional to use milk from Jersey and Guernsey cows only, making a clotted cream with a higher butterfat content and yellower colour.

This difference in butterfat content led to the Devonians using their richer clotted cream as a replacement for butter, going on the scone first, whereas in Cornwall they would traditionally butter their scone, spread it with jam, and top it off with their slightly lighter clotted cream (like a dessert might be topped off with cream).

How do you say the word ‘scone’?

Is it scone (rhyming with ‘gone’), or scone (rhyming with ‘cone’)? The way people say scone varies greatly across the country and appears to be independent of socioeconomic class or geographical region. Recent academic surveys have shown that about two-thirds of British people say scone to rhyme with ‘gone’, together with most of Australia, New Zealand, Canada and South Africa. Americans nearly exclusively say scone as in ‘cone’. In the words of Simon Thomas from Oxford University Press, arguments over the “correct” pronunciation can be “enough to end friendships, destroy marriages, and tear families asunder”. Can history help us solve this quandary as well?

There are several theories as to where the word ‘scone’ originated, but given its history and Scottish origins, the most credible explanation is that it was named after the Medieval capital of Scotland and home of the Scottish royalty of the time, a place called Scone (sometimes spelt Scuin) and pronounced “scoon”.

So, in all likelihood, we’re all saying it wrong.